The Nightingale Museum in Vimmerby is housed in a listed building from the 18th century, with timbered walls.

After considerable restoration work the building has received its former ground floor planning. The exterior is 19th century with an extension on the first floor along with panel clad walls which have been recreated.

One exhibition is devoted to the graveyard at Gästgivarhagen on the outskirts of the town, the site of almost 300 Viking graves divided into two sections. About half of the graves were excavated at the end of the last century and the finds indicate a rich society with contacts outside Sweden. Some goods have been restored and are now exhibited at the museum.

The museum can be found at the intersection of Sevedegatan and Drottninggatan, very close to the church. 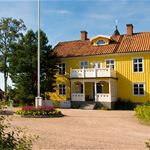 Distance: 1.2 km
Stay overnight in the unique accomodation Villa Gulekul, Villa Linnéa, at Emil's farm or in Bullerby cottages! Our family resort in Småland-style is open during the summer. Approximately 1 km from the centre of Vimmerby and close to Astrid Lindgren's World (2 km).
Book now 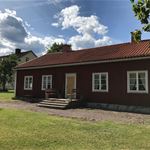